Kara slowed her pace through the east hall of the nursing home, checking to make sure Nurse Dearn wasn’t around before rolling her book cart into Mister Jackson’s room. “We don’t have much time, Jackie. Dearn’s on my case.”

“I’d say what my generation calls her, but I don’t want to make you blush.”

Jackie laughed, then waved her closer. “How much did we make this time?”

She handed over a deposit slip. “You’re set for the next five months.”

“It’s strange,” he said, as he pushed the slip into his bedside drawer. “I know I sold something, but I can’t remember what it was.” Biting his lip, he looked up at her. “What was it?”

“I can’t tell you. Those are the rules.”

“I know–I remember that. But…there are holes. It’s disturbing.”

“We can stop whenever you want.”

He shook his head, his lips tightening as he said, “My son was in to see me today. He lost another job. Can’t afford this place anymore. After all I’ve done for him…”

“I don’t like living here, but it beats sharing a urine-scented double with some drooling idiot down at the county assisted-living center–assisted dying is more like it.”

“That doesn’t mean you have to sell your memories. You’re under no obligation to do this.”

“And my boy is apparently under no obligation to me. Hook me up. See what you find. Tell me what it’s worth.”

“Whatever you want to take, hon’. My Alice left me after fifty years of marriage. I’m stuck with this lowlife son while my stockbroker daughter who could buy this place, much less pay my rent, writes me off. Why the hell do I want to remember any of it?”

“Okay. Calm down.” She dug out a pair of small goggles and slipped them over his eyes, fastening the strap, then attaching the wires that linked them to another pair of goggles that she put on.

Jackie moaned as the goggles started to hum. “I hate this part–why can’t you make me forget this, too?”

“I don’t know.” She didn’t understand the tech that went into the goggles. But then, she didn’t have to. Her role was creative–Boris said she made the best memflicks he’d ever seen.

Up to now, she’d been selective, just taking little pieces of Jackie’s memory, but chunks–big, meaty ones–sold so much better. If she did it right, he could be set for life.

She sat down in the chair next to him, immersed in his memories, tapping on the goggles when she wanted to tag a part, using her eyes to set the crop area.

“I’ll love you forever, Alice. I can wait for the wedding night if you’re not ready.”

“I’m coming home, darlin’! We can get married.”

“Take a cigar–pink this time, my friend.”

“What do you mean you’re dropping out of college? Did you get kicked out of this one, too?”

“Why doesn’t she ever call? It’s like I embarrass her.”

“Who is he? Who is he, damn it? No one just leaves. There’s always someone else!”

“Well?” Jackie asked, and he sounded like he was crying. 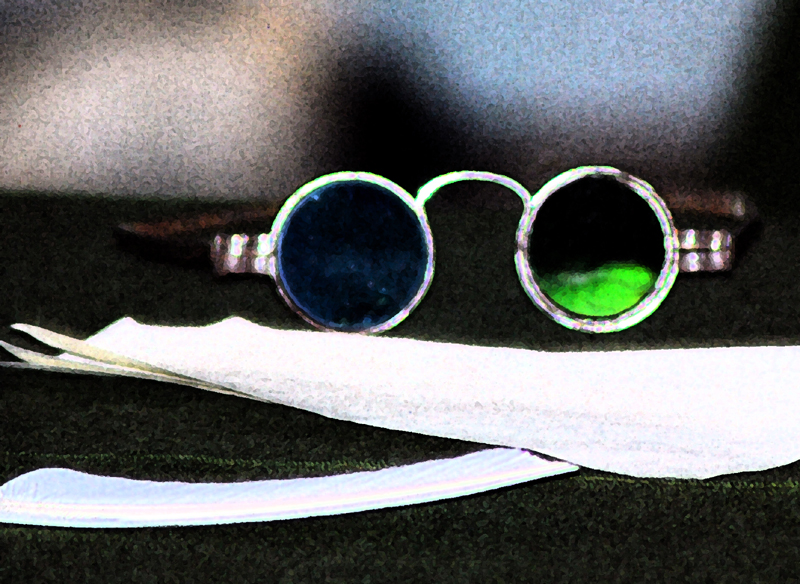 “It’s good. It’s very good.” There was a big market for this kind of “slice of everyday American life,” a yearning for what was–even if it turned ugly at the end. “I can make you rich, Jackie.” She reached out, found his hand, and squeezed it. “But I’ve told you before: who we are–our personality–it’s a sum of our memories. Once they’re gone, your life will be gone. too.”

“What life? Being an old man, lying here all day?”

“Lying here all day knowing who you are.”

“Not sure that makes it any easier, Kara. Just do it.”

“Leave everything before Alice.” He squeezed her hand. “I had a nice childhood. I had great parents, fun times. And Alice wasn’t my first–I can remember sex before her without any guilt.” He winked at her. “And I’ll still have you, right?”

“Well, if I take it all, you won’t remember me the next time you see me, but we’ll get reacquainted. And I’ll make sure you’re okay.”

“You always have, sweetheart. I’d have been out on my keister a long time ago if you hadn’t come along. You might like the younger me a whole lot better.”

“I doubt that.” She leaned down and kissed his cheek, then whispered in his ear, “I can still just take bits.”

“No. I don’t want to know I’m forgetting things. Just take it all and let me remember my life when it was simpler.” He laid his hand against her cheek. “Did I ever tell you that you look like my first girlfriend?”

“Well, you do.” He let go of her. “Now. Let’s get started. We’re burning daylight–isn’t that what filmmakers used to say?”

“Yeah. Only I think moonlight’s more fitting in our case.”

“Well, we’re burning something. Get to it, kiddo.”

She got to it.

Nurse Dearn saw Kara rolling her book cart out of Mister Jackson’s room–looking calm, not furtive and excited like she had the other night when she’d thought Dearn was off shift–and motioned her over. “What are you doing?”

“Visiting an old friend.” Kara’s attitude needed some adjusting, as always. And her ‘tude wasn’t the only thing: her skirt was too short, makeup too heavy, smile too wide.

“He’s getting worse–living in the past. Doesn’t need any of these.” Dearn poked through the reading material Kara distributed. “Won’t remember a damn bit of it.”

“He remembers when he was young. He told me I looked like his first girlfriend.”

Kara’s face tightened, but she got a move on. Dearn waited until she was gone, then headed into Mister Jackson’s room.

“Because you’re really, really old.” Dearn smiled at him in a way they didn’t teach in nursing school. “How much did she pay you?”

“Never mind. She thinks she’s helping when she does this for you all. But really, she’s helping me.” She sat down, studied Mister Jackson. “I bet you’re bored, stuck in that old body. Confined to bed when inside you’re only–what? Twenty?”

“‘Fraid not.” She reached into her pocket, pulled out a VR-i. “This is the end to your boredom. It’s what those in the business call immersive film. I think you’ll find it very stimulating. Maybe get a little deja vu every now and then.”

She turned it on, smiled as his expression changed.

“Are those my parents? And Jillie Ann?”

She tapped her finger on the arm of the chair as he watched his life pass before his eyes. Or at least his twentieth year. Leaving his girlfriend when he met Alice, falling in love, and then…cut.

“What is this?” He tore the device away from his eyes. “Where’s the rest?”

“First taste is free. If you want more, it’s going to cost you.” She didn’t tell him most of it hadn’t hit the streets yet; this was just the trailer and his memory was still safely in the possession of Kara, but eventually Dearn would track it down. “It’s your life and you sold it, and now you have lots of money. And if you want any of it back, you’re going to share that lovely money with me.”

“I don’t…I don’t understand.” But he was eying the VR-i almost longingly. “This is wrong.”

“Tell that to your precious Kara. You know: the little blonde who looks like your first girlfriend? She’s the one who did this to you. And if you want any of it back, you’ll say nothing to her or you’ll spend the rest of your days with no recollection of your memory. She can’t put back what she took, but at least I can offer a view of it.” She patted the VR-i before stuffing it back in her pocket. “Think about it, Mister Jackson. I’ll let you get some rest.”

Dearn sauntered out to where Kara was reshelving books in the reading room. “Mister Jackson seems a little better. Remembered something about his wife.”

Dearn wanted to congratulate her on a stupendous retrospective–it was going to be a real moneymaker. But she didn’t want to give too much away; it wouldn’t do for Kara to know Dearn had been making money off her work.

So she settled for pushing in one of the books Kara had just reshelved so its spine was even with the others. “You know, it doesn’t take any longer to do a job right, dear.”

Kara’s look was almost as priceless as her little side business.

Gerri has over fifty stories and poems published in various print and e-markets. She is also editing an anthology for Hadley Rille Books. More information on any of her works can be found at her website, GerriLeen.com.

The Witch of Sherman Oaks