Shawn Rubenfeld was a finalist for the 2011 SUNY Thayer Fellowship for Outstanding Achievement in the Arts, and for the Patricia Kerr Ross Award. He received the 2010 Vincent Tomaselli Award in Creative Writing and performed archival work on the Ernest Hemingway manuscripts in Boston. He is currently an MFA Fiction student and teaching assistant at the University of Idaho.

Martha in the Manuscript

Saugerties is a pleasant place; beyond the coffee shops and fruit markets are rows of tall, colorful houses lined along endless concave streets like stretches of rainbows. But it also has the river—the same river. So even though I’m sitting on a bench that’s more than a hundred miles away from the city, except for the lighthouse, the water across from me is no different.

The lighthouse is tall with a rounded black terrace and a point on top. I watch the people linger around it. Some are inside, their backs against the windows. Others walk across a wooden dock. No one steps onto the terrace.

The bench also has me in perfect firing range of a breeze that I imagine tumbling down the mountain like little rocks, blowing against the lighthouse so the chimes hanging on the wooden dock whistle along with the rippling water. It hits often, not like the breeze in the city, which only found me between the spread of buildings.

Suddenly there’s a sound to my left. I turn and see something else that usually doesn’t find me: a tall, attractive woman, brown hair splitting at her forehead. I don’t think she’ll stop, but she does.

I dig my hand into my pocket, nod, and move over so she can sit.

“I gotta run,” she says, and looks at the space I made. “But I could really use a smoke.”

She considers me carefully. “You’re new in town, right?”

“You’re not crazy are you?”

She takes the cigarette and sits, leaning in for me to light it. She smells like wine. “Depends?” she repeats, “what’s that supposed to mean?” 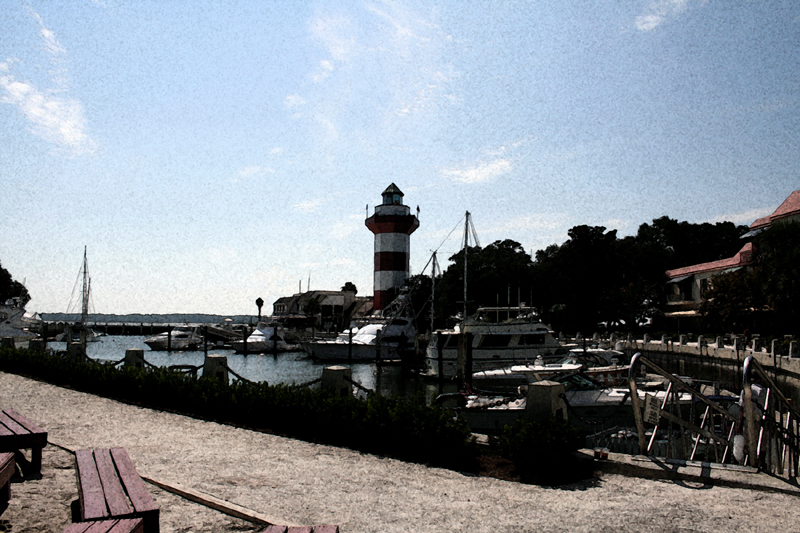 She takes a drag of the cigarette. “That so? All right then, crazy man, what’s a guy like you doing out here alone?”

“I’d tell you, but I don’t want to give the secret away.”

“How about this,” I begin. I realize I’m still holding the lighter so I put it away. “You tell me why you’re in such a rush, and then I’ll tell you something about me.”

She looks at her watch. I think about what I should start with. “It sounds like a fair deal, and I’d like to, but I really don’t have the time right now.”

“Probably because you’ve got secrets too.”

She seems taller the second time she stands. I want to stand too, to see if I’m taller than she is, but I decide to stay sitting. “I’ll leave that up to you, crazy man,” she says. “Thanks for the smoke. I’m sure I’ll see you again.”

Considering five minutes ago I was thinking of leaving, I’m satisfied being quiet and watching her body shrink into the distance. I take a deep breath and turn to the river. I knew there was something about this place—that proved it. A boat stops at the lighthouse. It’s the fourth of the day. Then I see someone looking at me from the terrace. I know who it is, but I can’t believe it. I stand to get a better view, but she turns and walks back into the building, and I know I won’t be able to see her again.